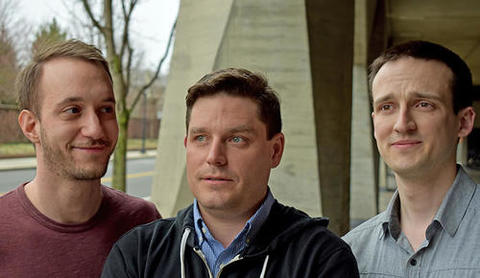 While much of the focus in quantum research has been on the race to build a useful quantum computer, one that far outstrips the computing power of traditional computers, a contingent from the Yale Quantum Institute (YQI) also has a second quantum endeavor in the works. They’re turning their data into an acoustic performance this Friday night, June 14.

“Quantum Sound,” part of the International Festival of Arts and Ideas, is set for two sold-out shows at 8 and 10 p.m. at Firehouse 12, on Crown Street. The 10 p.m. show will be broadcast live on WPKN radio. There’s also talk of putting out an entire album of quantum sounds.

“We purposely avoided the term ‘quantum music,’” said sound artist and composer Spencer Topel, who took on the challenge proposed by YQI manager Florian Carle to play superconducting instruments during a year-long artistic residency at the institute. Topel is a researcher and designer working with acoustics and sound, and his work has appeared in major venues and concert halls around the world, including Lincoln Center and Carnegie Hall.

“We’ll be introducing the audience to the quantum systems we use and talk about how they are precursors to quantum computers. These systems generate data that we then use to create sonic signals,” Topel said. “We follow this presentation with a 40-minute performance consisting of a controlled improvisation that we composed collaboratively over the last three months or so.”

The “we” Topel mentioned are his bandmates — Yale physics graduate students Kyle Serniak and Luke Burkhart. Serniak, a long-time guitarist, came on board after hearing Topel give a presentation about his previous work; Burkhart, who has experience singing in musical theater, joined quickly thereafter.

For the Quantum Sound gig, this intrepid trio will perform the first-ever concert created from the measurements of internal operations of superconducting quantum devices. Their instruments — the superconducting quantum devices — are housed in special refrigerators that Yale researchers use to chill things down to near absolute zero for experiments.

Oh, and the fridges all have nicknames: Audiences may get to hear data coming live from JPC, Blue, or Lazarus.

The students’ experiments record electrical signals coming from the fridges, which Topel and his crew have spent months sampling — or as Topel says, “sonifying” them.

This is the crucial component of Quantum Sound, according to Carle, who will be giving the quick primer on quantum computing before the concerts. The team is adamant that the sounds being produced remain faithful to the characteristics of the actual data.